Weightpulling is a quite historic activity in the sled dog world, its roots being traced back to the Alaskan Goldrush and references to the activity famously appearing in Jack London's "Call of The Wild". For the agricultural amongst us it is much like a tractor pull!

Dogs are divided into weight classes and are required to pull a set weight on either a wheeled trolley or sled (depending on surface) over a 16ft distance within a 60 second time frame. They use a special type of harness that utilises a spreader bar at the back to evenly distribute the weight the dog is pulling and to minimise any risk of injury. The handler is permitted to stand and drive from behind but a majority choose to stand in front of the dog, unable to cross a set distance and approach the dog once the pull has started. No baiting with treats or toys is allowed, only vocal commands, and so this isn’t just a sport of brute strength but one of technique and the dogs desire to pull. 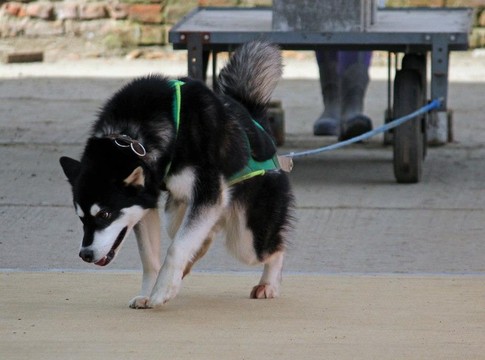 The sport is particularly popular in North America with the IWPA (International Weight Pulling Association) and ISDRA (International Sled Dog Racing Association) – along with many other non-profit organisations – organising competitions across the continent. These attract a variety of breeds, but the sport is very popular with the Malamute fraternity, as their original freighting function of pulling heavy weights at a steady speed makes them physically and mentally suited to the challenge. The skill and working aptitude required of a dog to succeed in this has been recognised by the AMCA (Alaskan Malamute Club of America) who have incorporated titles into their Working Title programme.

In the UK, the activity is growing in popularity with standalone events being historically held alongside the infamous Aviemore rally and the Kaytoo ran Allerton Park Championship - for a time period also complimented by a Southern Championship organised by The AMCUK (Alaskan Malamute Club of UK) - running from October to April each year. The Allerton pulls may have originally been designed to give the opportunity for UK dogs to gain their AMCA titles (with other events not fully adhering to AMCA guidelines) there are now a growing number of dogs taking part, many just for the fun day out! 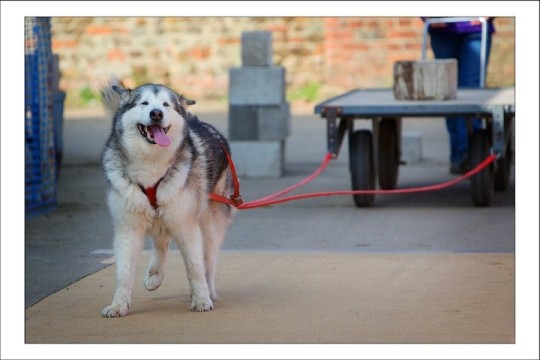 Maya shows how much fun can be had in the chute (even if not pulling). Photo Credit: Sammy Taylor (Samnooshka Designs)

I enjoy the sport because it really brings out the dogs personality, each having their own style and attitude to the pull, and the fact you cannot make a dog pull if it doesnt want to (regardless of whether it is capable) means the dog sets its own limits . A dog that is trying really hard but cannot make the pull can be assisted by the chute handler and pushed through to make sure they always end on a good note (even if that pull then doesnt count towards a top weight) and the satisfaction is clear on most dogs faces and makes it difficult for them not to have a good day out. 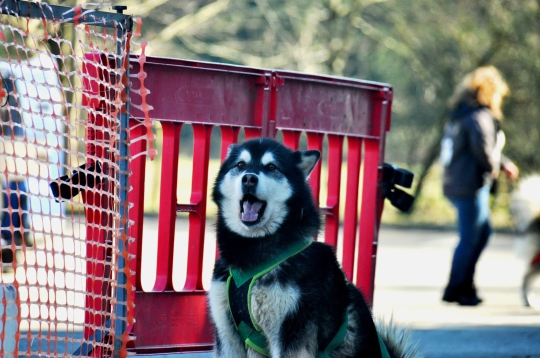 My first 2 dogs it was fair to say were never competitive weightpullers.

Stan never made it out of novice - a non-competitve, training class where bait, approaching the dog and even the use of a lead is permitted. He neer understood the need to pull without a treat in front of him (indeed, sometimes refused even with a treat directly under his nose) – but he still got the odd turn ni the chute for a social day out and to do something different.﻿ 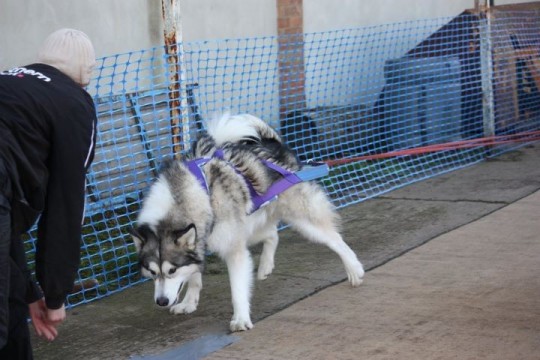 Maya, like Stan, was never going to make a title holder and as a rescue who joined my life as an older lady was a late starter, but up till the age of 9 or so she enjoyed pulling on her own terms and never failed to make it very clear when she'd had enough by completely ignoring my calling her and walking straight out the chute. But when she was in the mood she enjoyed getting her head down and showing off to the crowd. 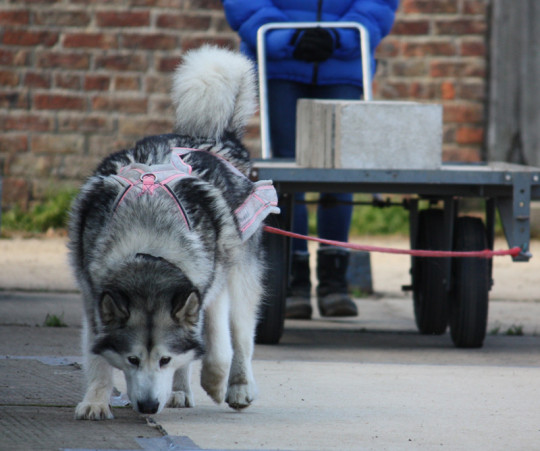 Lucie was my first competitive girl who took very well to weightpull, needing little encouragement to get her head down and pull.
In her first competitive season in the 2012/13 Allerton Championship she comfortably earned her WWPD title, getting the four required legs in four consecutive pulls ranging, her top weight pulled consistently ranging between 19–21 times her own body weight (to put into context a dog needs to pull a minimum of 12x their own body weight to earn a leg on this surface) and earned the Stormwinds trophy for 3rd in the 61-80lb class for that year. 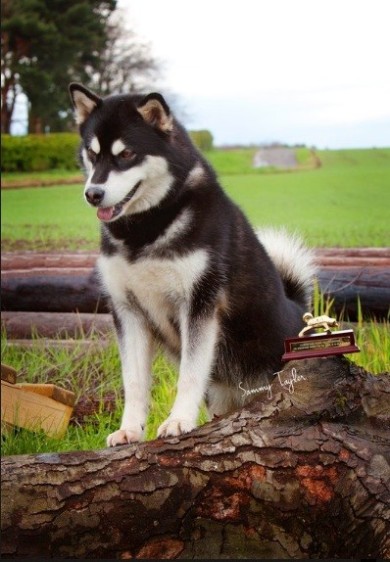 She even managed to pull 24 x her bodyweight in the last pull of the 2011/12 season to earn her first WWPDA / WWPDX leg. She repeated this performance four more times in the 2012/13 season, fulfilling the requirements for her WWPDA / WWPDX title and earning her the Cedarcreek Trophy For 2nd in the 61-80lb class in the overall Championship. 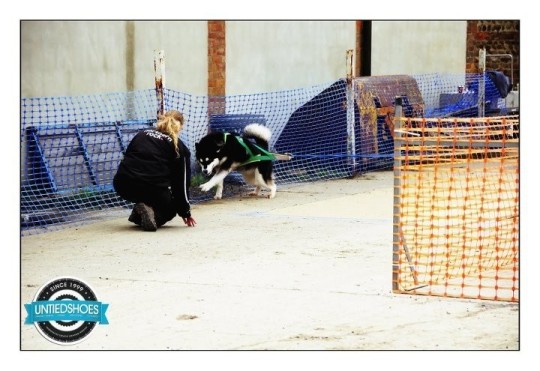 Lucie gets her head down and puts her shoulders into it! Photo credit: Craig Richards (UntiedShoes Web Design) 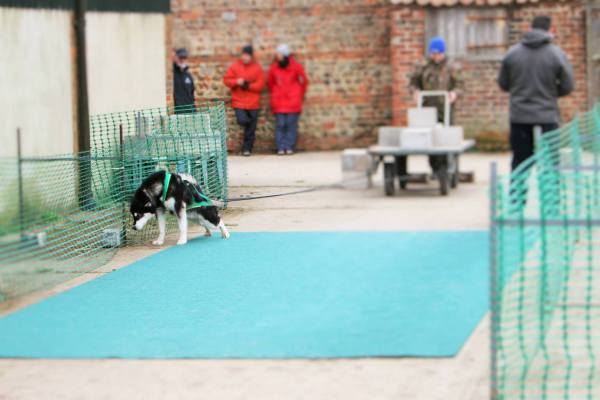 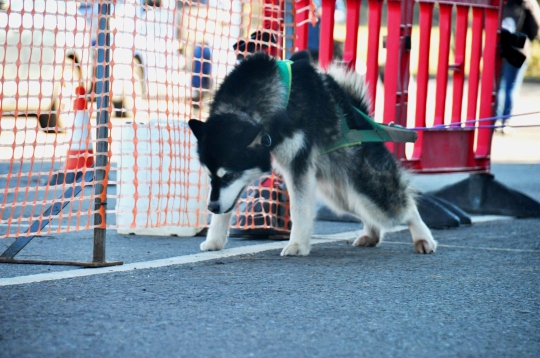 Harry on the other hand was a tad over-enthusiastic so we started off slowly, concentrating on learning the techniques involved in this and seemed to very much enjoy it, and by the last two Novice Classes of the 2013/14 season pulled the maximum weight of 1000lb as if he were in Competition with no issues. 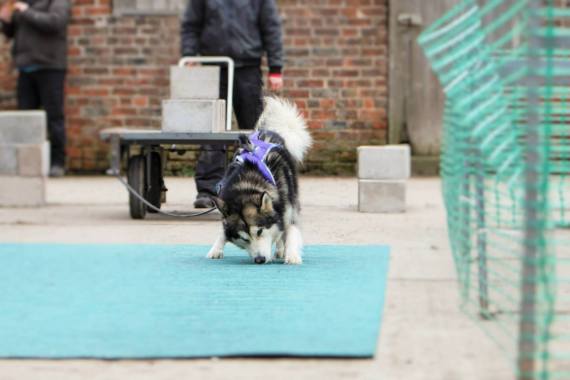 He had his first competition in October 2014, and I am pleased to report that from his first 4 competitions he not only earned his WWPD title in back to back pulls, but on his third and fourth attempts pulled over 23x his bodyweight to earn one WWPDX leg and two WWPDA legs.  The efforts of his work this season meant he went on to come 2nd in the Overall Allerton Park Championship 61-80lb class, and ended the season with a pull of 24x his bodyweight to earn a 2nd WWPDX / 3rd WWPDA leg and a new Personal Best of 1800lb. 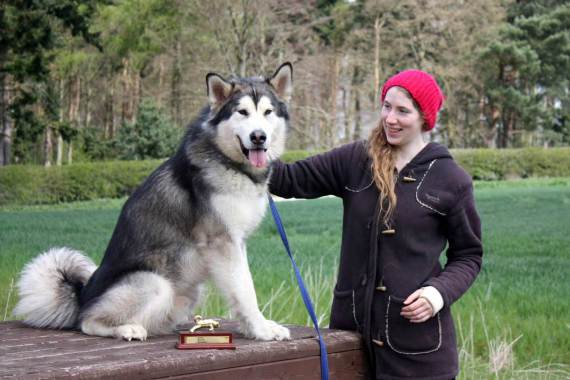 The next few seasons were challenging, seeing him move up and down between weight classesand his concentration just as bouyant, however he still managed to earn a fourth WWPDA leg - just one more to go!! 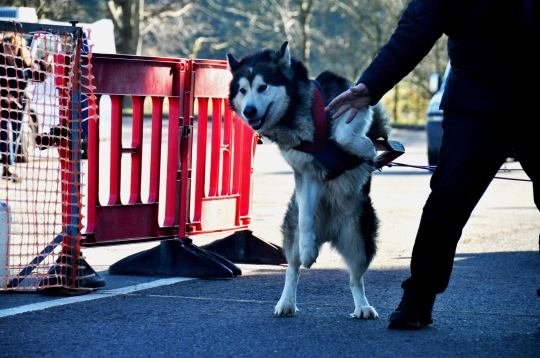 Dylan was the first of our Greenlands to have a try at weightpull, and presented a new challenge showing clear strength and aptitidue for the sport but wanting to do everything at 100MPH and demonstrating that signature cheeky, stubborn streak when things don't go his way. 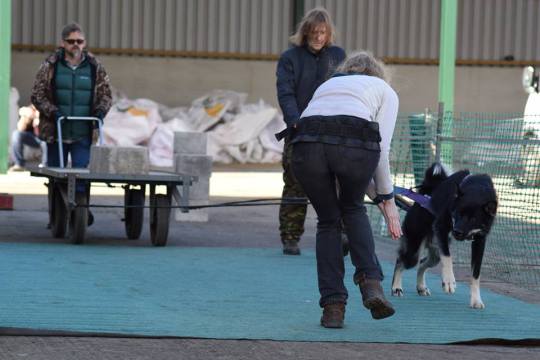 That said, when he does manage to steady and concentrate he has achieved great results, and is currently the UK Breed Record holder for weight pulled with PBs of 20.25x his bodyweight & a top weight of 1700lb. 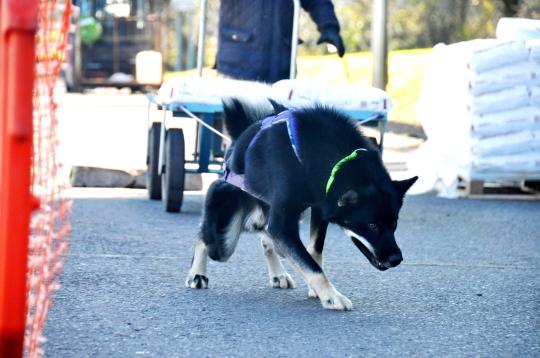 Noah and Alice have both now started pulling although due to Covid-19 restrictions having turned 1 year old in September 2019 they only managed a couple of pulls in the 2019/21 season with the 2020/21 season was cancelled.

Noah was a slow starter - finding the concept so much more difficult than running on the rig - but by his last pull was looking ready to move out of novice class.
Alice on the other hand has had a couple of pulls in competition, and made me very proud at her first competition with a PB of 900lb / 16.4x bodyweight. We will look forward to seeing what the fuure brings for them.