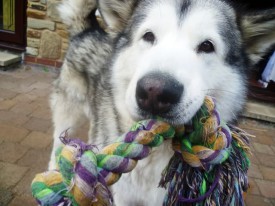 Maya came into my life about a year after Stan, and just as he changed my life she too was to turn things on their head and give me a fresh perspective on the world of Malamute ownership.

Before her arrival I had already realised the urge for another malamute. As I had just started recreationally working Stan, I desperately wanted to get a regular team mate and so the idea of an older lady who would be able to get straight into working had a lot more appeal than starting from scratch with a puppy.

I started looking at the Malamute Rescue website regularly and while browsing one day came across Maya (then Mia). For whatever reason she caught my eye, and after thinking over the reality of another dog made the enquiries. Necessary checks and paperwork completed, I made a trip to Wales to meet her and before I knew it I had a second Malamute on my hands.

Maya’s personality shone through from day one – a vocal lady who always had something to say and the kind of girl who I suspect from puppyhood would have never accepted being anything less than top dog.

Her bossy qualities didn’t make integrating her with Stan the easiest thing I’d ever done, but was a definite learning experience. However despite her dominance, in typical Malamute style she went even more puppy like than her kennelmate during playtime and was utterly brazen in her mannerisms and attitude to life.

It took a few months of hard work, but we soon went from on-lead supervised time together only, to having the two of them happily snuggling on the sofa together. They became the married couple of my pack who ate, drank, and slept side by side whilst keeping an eye on the youngsters.

Despite no prior experience, she took to working in harness with enthusiasm and vigour. She proved to be the leader we were looking for with Stan, having an attentiveness to commands (even if she sometimes chose to ignore them) and the natural motivation for keeping that line tight.

She loved scootering on her own as much as running coupled, and although never competitive as a veteran discovered an enjoyment of recreationally weightpulling - particularly the part where she decided enough was enough and walked out the other end of the chute, giving the spectators a lot of laughs in the process.

As my pack grew, it became clear she prefered the company of the boys to the girls, and she also had a serious soft spot for our Harry, loving flirting and telling off her German toy boy who took her reprimand in good humor at all times.

In her last few years, where her more active life needed to wind down, she lived happily with her "beaten husband" Stan, keeping him in check and enjoying her creature comforts. Somehow, when she left us at 13.5 years of age, it still felt too soon. I look back fondly on her as one of the many examples of just how wonderful a rescue dog can be and she holds a very special place in my heart.