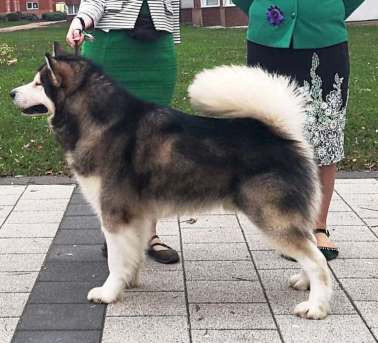 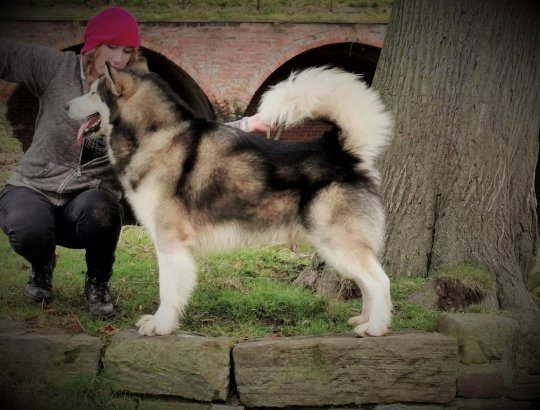 Fenrirkin are delighted to introduce our youngest Malamute, Harry - who was to be Harrison but soon made it clear would never be serious enough for such formal address and is now more often called Haz, Hazzle & Hazard! 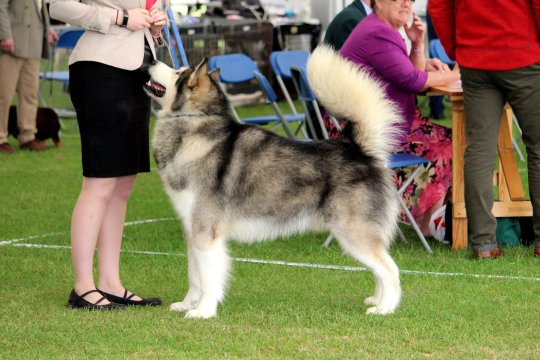 Bred by Sylvia Gremm (Of Kiyara's Wolf-Pak), he possesses a very exciting pedigree.

His sire, Cash, came directly from Nancy Russell of Storm Kloud and represents a linebreed of her highly titled and influential Mathew (AM / CAN CH Storm Kloud's Oomiak CD WWPDX WTD WLD ROM ROMWDX); his Dam, Kim, is of Sylvia's own breeding and her lineage﻿ blends numerous influential kennels (Storm Kloud, Cold Valley, Sno Shire & Kotzebue / Chinook to name a few). Both parents have worked as lead dogs in Sylvia's kennel and generations of proven working dogs behind them, and so I had high hopes he would possess the same working drive and aptitude as them, and he has not disappointed.

Having lived with his family in Germany while he waited out the requirements for his pet passport, he arrived in the UK at 15 weeks and planted his feet firmly under the table. He has a very sweet, submissive nature at home, but with a definite cheeky streak and an abundance of energy!

Though he can be nervous with strange dogs, once settled he enjoys making new friends - especially the ladies - and at having first been taken under the wing of Lucie, soon took on our young Greenland Dylan as a fun little brother to be bossed around by, and later proved the company our older Gentleman Stan needed after we lost his kennel mate Maya. His most recent duty has been to look after our two youngest Greenlands and show them the ropes at home, a duty he takes with much enthusiasm and tolerance. 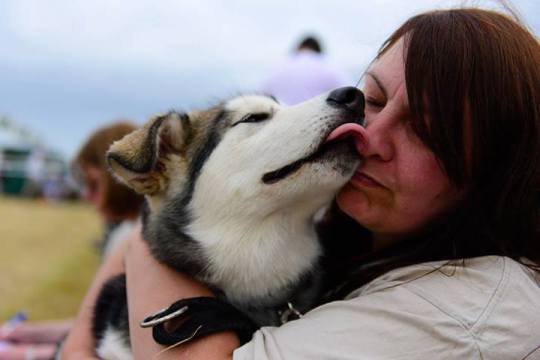 He started his show career in September 2013 at 6 months and although not really understanding the concept of standing still, loved the bit where he got a treat!

In his Puppy Career he gained several Crufts 2014 qualifying places at Championship Shows, and at Open Show level gained multiple Best Puppy in Breed and Working Puppy Group Placings, and even a couple of Best of Breeds and an Adult Working Group placing.
In the 2013 AMCUK Malamute Of The Year Awards (MOYA) he was placed 10th Top Puppy and 12th Top Import from only 3 months of showing - not too bad! 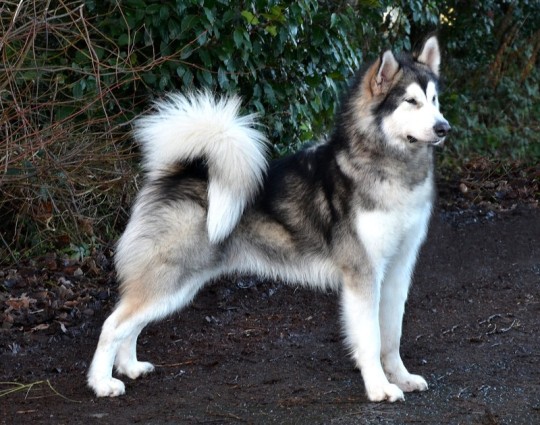 2014 went well for him, going Best Puppy in Breed at his final Open Show Puppy Class in March, continuing with multiple class wins at both Open & Championship Show level, Crufts qualifying for 2015 with ease. He finished the year with the accolades of 2nd Top Import, 3rd Top Dog and 6th Top overall Malamute in the AMCUK Malamute of the Year Awards; he even managed 19th Top Puppy from the 2 months of showing he had left at the start of the year! 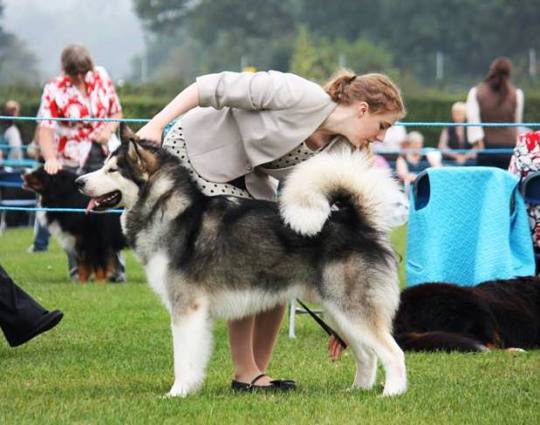 Harry's showing in 2015 was limited, with the focus at the start of the year more on working, and in the latter half on breeding plans, but at the first eligible Championship Show he attended in May (SKC under Breed Specialist Barbara Stanier) he qualified for Crufts 2016 with a 2nd in Post Graduate Dog. He repeated this exact same result at SWKA Championship Show in October under judge Steve Myring, behind the RCC winner on the day, no less.
He did make it to a few Open Shows in the interim and came away with a few class wins and even the award of Best Special Working Certified Dog at the AMCUK May Open Show. 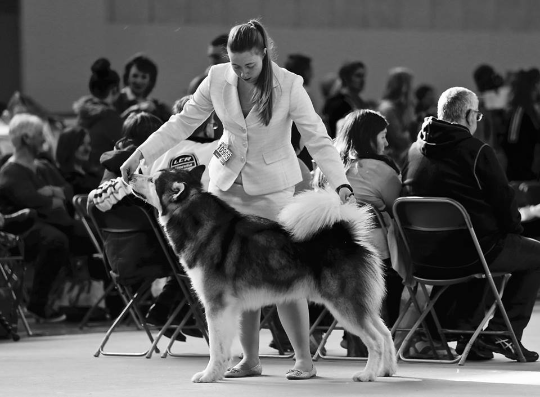 2016 was also planned as a quiet year for Harry, with our young Greenland Dog's puppy career to concentrate on, but saw him take a couple of 1st places at Open Shows along with a Post Graduate Dog class win at WELKS Championship Show, Crufts qualifying him for Crufts 2017. 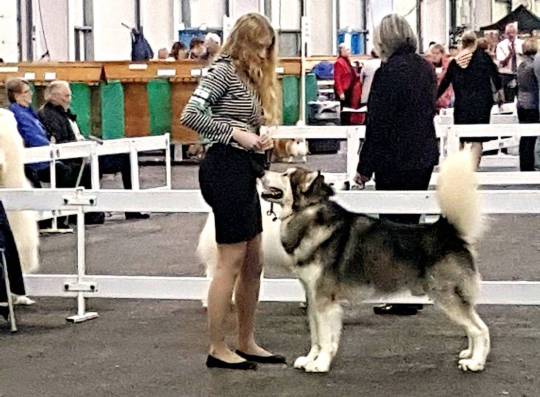 The fates remained against Harry in 2017 as the result of an injury during the Summer, but nonetheless still saw multiple class wins & BOBs at Open Shows - including a 1st in his class at the AMCUK May Speciality Show - alongside multiple Crufts qualifying places at the Championship Shows he did make it to. 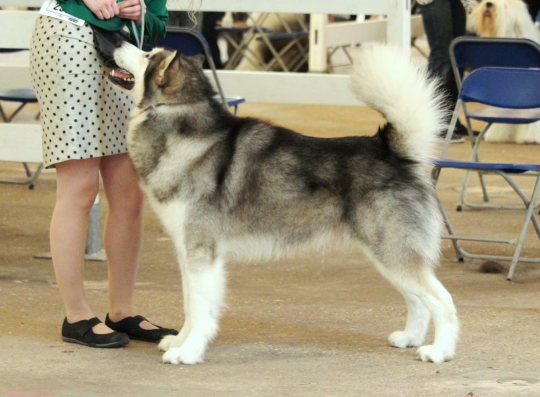 2018 settled down to prove a decent year for Harry, seeing him gain multiple class wins at Championship Show level, including a 1st in Limit Dog at Southern Counties which gained him his KC Stud Book No and Crufts qualification for life!
At Open Shows he has gained multiple Best of Breeds and Group places, and even take his second Best Working Certified Dog award at the AMCUK May Speciality Show.
He had his first venture to show abroad in December, where he picked up 1x CACIB, 2x RCACIB, 1x CAC & 1x RCAC - not a bad effort! 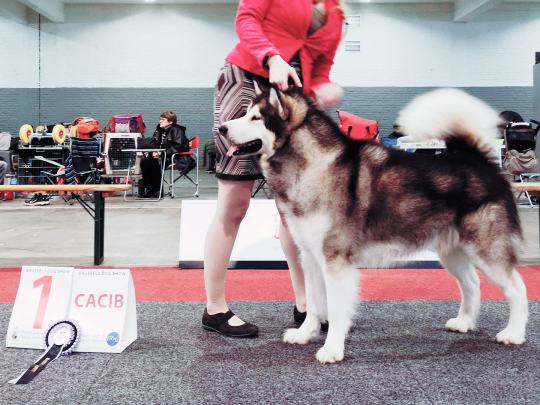 2019 saw him starting to mature gaining numerous class wins and Open Show Best of Breeds & Group placings to keep us busy, including a Working Group win too..
Not just that, but he excelled himself abroad, taking not only 2 Green Stars and BOB in Ireland, but a Group Shortlist too - clever Haz! 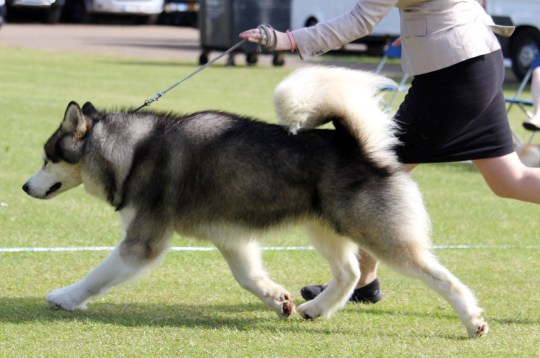 2020 proved a strange year, with the coronavirus pandemic cutting short many show plans, but between January & March he racked up numerous Open Show wins and group placings, and at his first Veteran Class in Crufts, from an entry of 16 made it down to the final shortlist of 7. 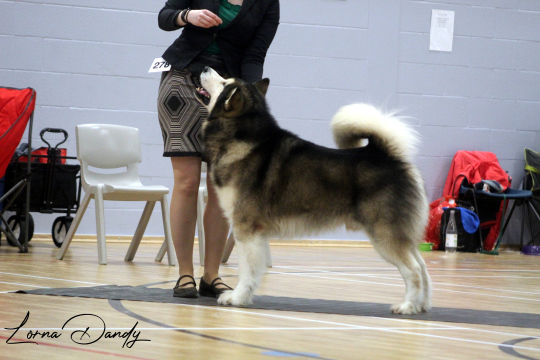 When 2021 finally saw shows recommencing in June, Harry's time in the ring was limited as we focused on our young Greenlands in the mostmain, however he did not disappoint and although had just a few Champ Show Veteran class appearances he had a marvellous time our and about Open Showing, gaining 2 BOBs (both of which went on to give him places in the Working Group), 3 RBOB, 4 Best Veteran in the Working Group and an amazing 2 Best Veteran In Shows!! 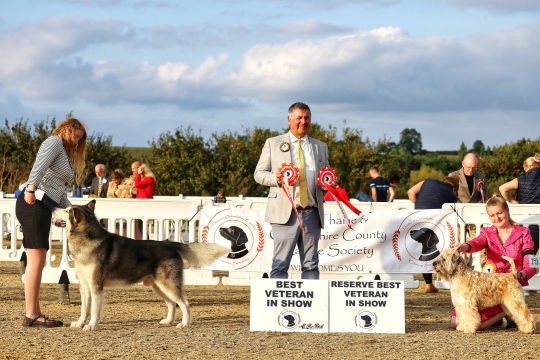 Working is definitely where Harry excels!

As a youngster, he was totally unphased by wearing a light backpack on our evening strolls. In September 2014, having been building up weight and distance we bit the bullet and took him out for his first WPD leg with friends around the beautiful Lake District scenery and he thoroughly enjoyed himself! We headed back out there during Spring 2015 and closed his WPD title in March, ending with an enjoyable overnight camp out. 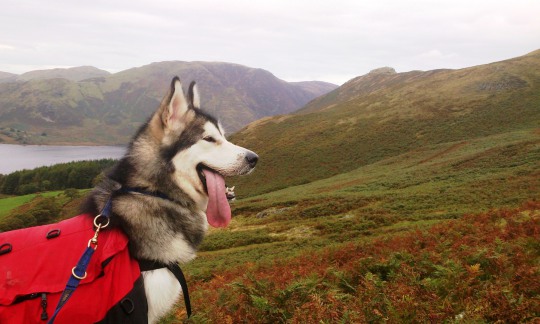 Showing off his post-drink tongue!

In May 2015, we headed up to the Cairngorms in Scotland where he started both his WPDA & WPDX titles with a circa 44 mile backpack over 3 days.

Equally, when training in harness Harry showed all the right signs. He just loves running and pulling, never questioning what he was being asked to do and having that natural desire to go! 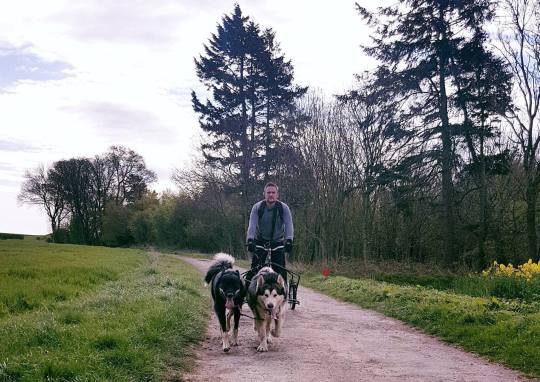 In February 2015 he enjoyed his first longer distance trek, covering eleven miles (running half and half with Lucie and friend Lula) to earn his first WTD leg, and was back out a month later with Lucie to earn his second, and then once more at the end of April with Lula for his third. He closed his title in April 2017 running with Dylan. 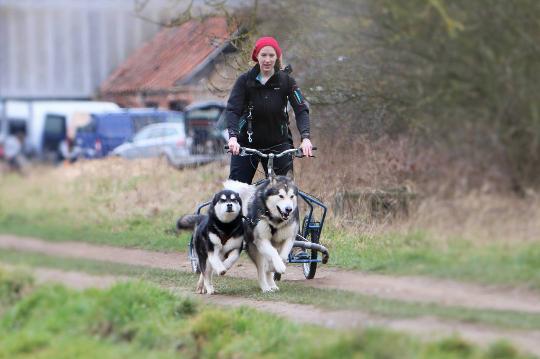 In January 2017 Harry had his first rally competition running with our resident Greenland Dog Dylan, where over a tough hilly course they claimed 1st place in MB2 - and what fun they had too! 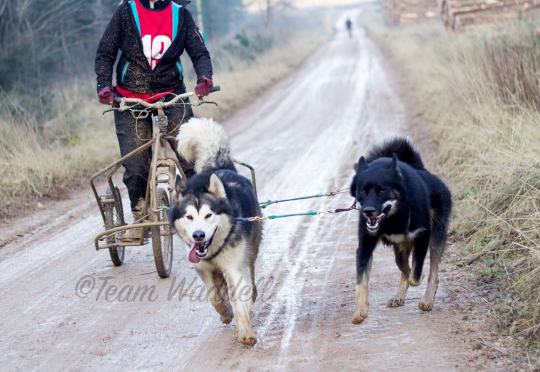 He enjoyed more success with Dylan throughout the remainder of the season, and although missed out on the start of the 17 season due to a resting injury, started it with a bang in 2018 by winning his MB2 class at AMCUK Grizedale Rally, running with CED friend 'Ember' and owner Afear Logan for the first time. 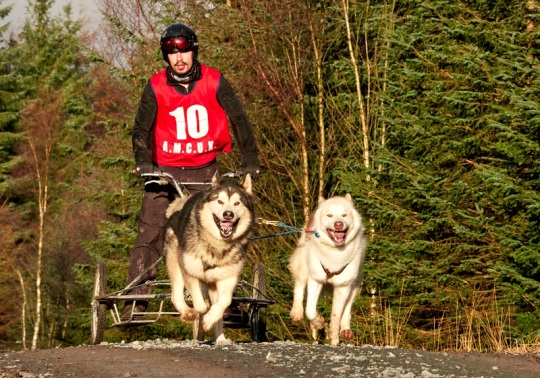 Our rally season was limited throughout 2019 for a few different reasons, but he did squeeze in a couple of races at the start of 2020, and he in particular made me very proud by showing our young Greenland Noah the ropes at his first rally, SHCGB Sherwood in January, where friend Sarah took them both out with her CED girl Peech for an inaugural CED-Malamute-Greenland team - and they won their E3 class! 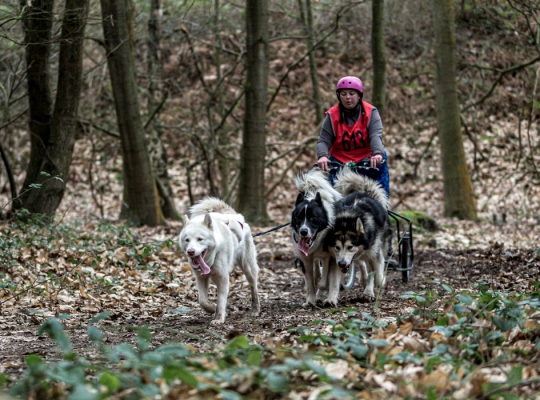 Harry started weightpull training with great excitement, and while initially a bit *too* enthusiastic, he is slowly learning the correct technique and is clearly enjoying himself. 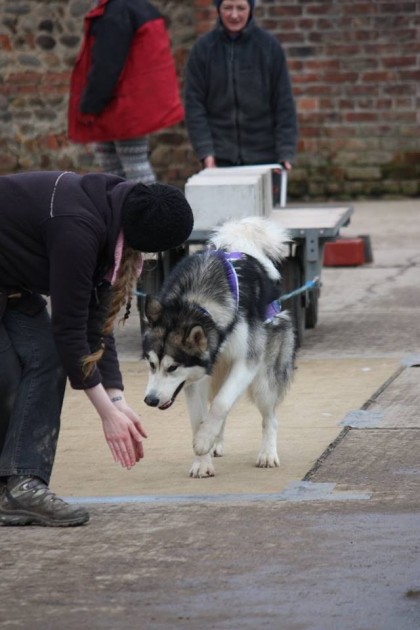 In his first competitive season he earned his AMCA WWPD title in back to back pulls. As if this wasn't enough, in only his third competition he managed to pull over 23x his bodyweight and come 4th in a competitive 61-80lb class, earning his first WWPDX / WWPDA leg. He repeated this performance at the next pull, closing his WWPD title and earning a second WWPDA leg, and at the end of season pull got a new Personal Best of 1800lb, over 24x his bodyweight, which earned him his second WWPDX / third WWPDA leg.
His efforts of the season also earned him the Cedarcreek trophy for 2nd in the 61-80lb class in the overall Allerton Park Championship - an awesome start to his pulling career!

His efforts for the season also placed him 9th Top Weightpull Dog in the AMCUK Working Malamute of the Year Awards, the first time that Weightpull has been included in addition to competitive rallies in this competition. 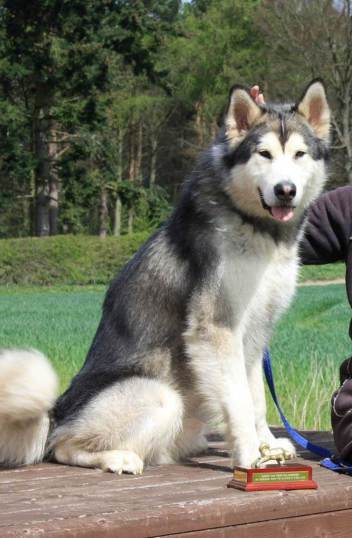 The 2015 / 2016 season was a slow starter, with poor weather making for tough pulling conditions and Harry's weight moving him between classes knocking his chance for a high position in the championship, but he still managed 6th place of 32 qualifying dogs in the 61-80lb class. 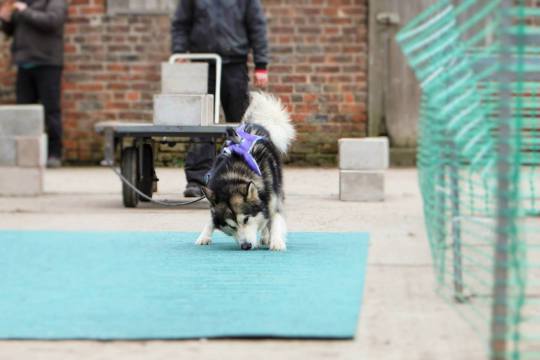 The weather was no kinder when Harry found himself moving between the highly competitive 81-100lb class for the 2016/17 season, however we continued to work hard on his technique, which culminated in him earning a 4th WWPDA title leg in the March weightpull. 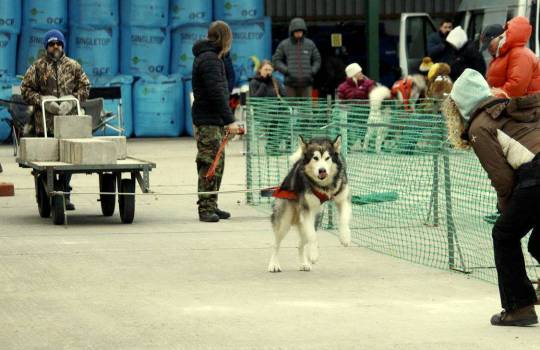 Unfortunately Harry is now well known for enjoying more time bouncing in the air rather than  putting energy into going forward (perhaps he enjoys the laughter from the spectators a bit too much)! We are still hoping we may manage to gain that last WWPDA leg as a veteran, but for now we know Harry just enjoys his time in the chute, even if his concentration is often limited! 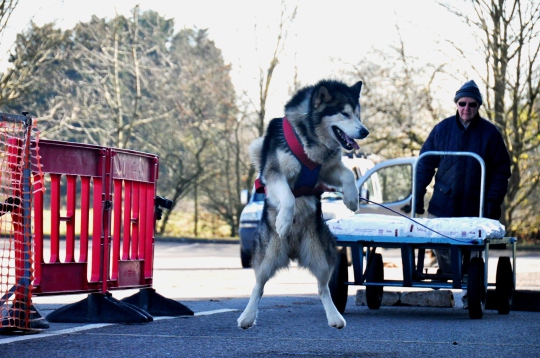 I cannot thank Sylvia enough for entrusting this special boy to me. He has made us very proud not just in the ring and in harness but as our chief puppy sitter at home and all round sweetheart. 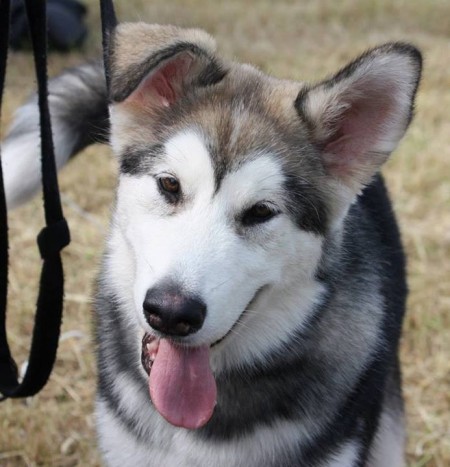