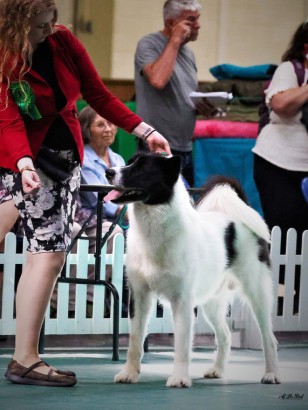 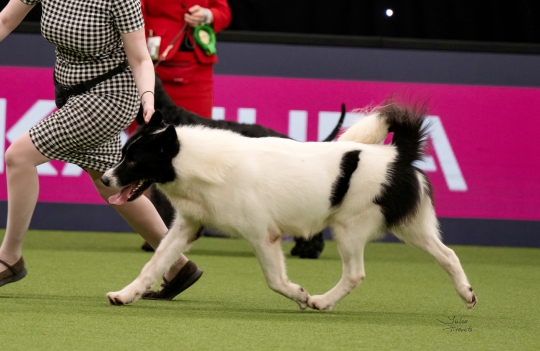 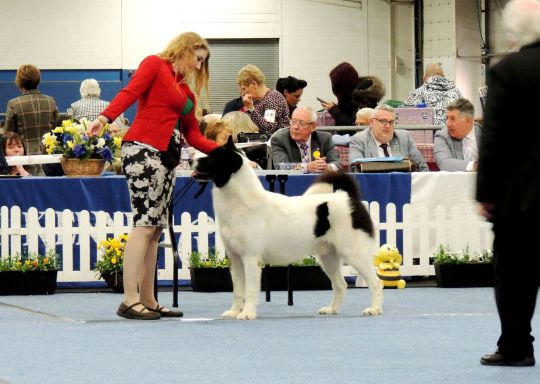 Please say hello to our Norwegian boy, the handsome Noah! 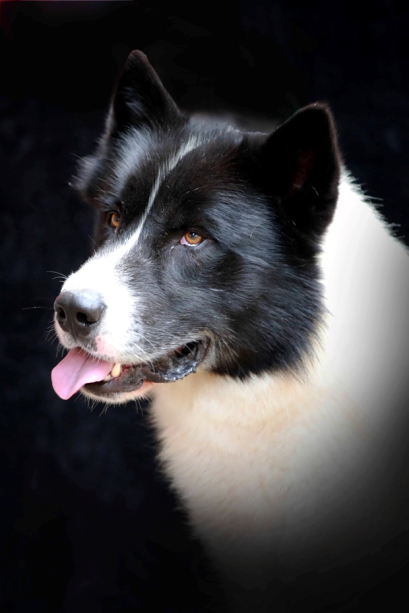 He is bred by Marit Ånes of Suna-Sanik Kennel in Norway being cousin to our, Alice.

His Mum, Suki, was infamous as one of the strongest lead dogs in Marit's kennel, demonstrating the uniquely stubborn but dedicated character that makes this breed so special. Her success is seen in both her racing and showing accolades and has been passed onto her offspring, making her a leader for Suna-Sanik in many ways. 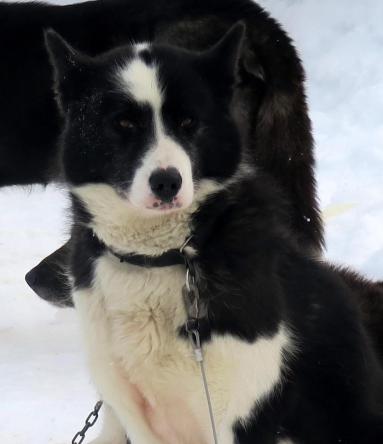 His father, Balder, is a sweet character with a strong working ethic, having finished both the Polardistans (160 km) and Beaver Trap Trail (100 km) races, with 4x1st places from other races. He has had a great show career in Sweden too, with multiple CACs / BOBs and even a Best in Show accolade to his name as well as Champion titles! 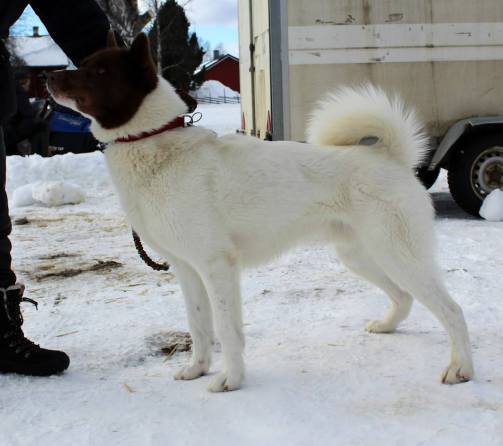 Noah has a wonderful mix of cheeky and sweet - loves his cuddles but seemingly unaware of his size can still be a bit of 'bull in a china shop'. He adopted our Malamute Harry as his "big brother" at a young age, enjoying chasing him for kisses & playtime (and often getting a telling off in the process for barging and jumping on him for attention) and has delighted us with his non-confrontational approach to other dogs, whether male or female - definitely a lover not a fighter!

His show career started well, with a trip over to Ireland in Mid-March for his first Baby Puppy classes where he gained not only back to back 1st / Very Promising gradings, but took Best Baby Puppy in Breed on both days! 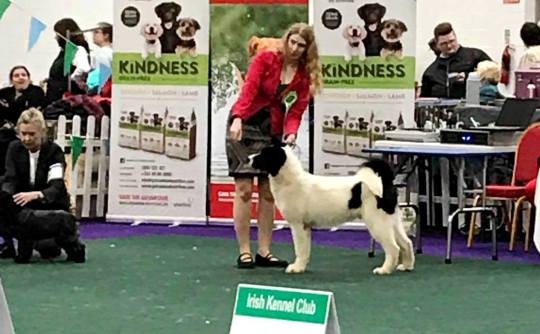 In the UK his success was just as strong, with numerous Best Puppy and even Best of breed accolades at Open Shows, alongside a cluster of Reserve Best Dogs and Best Puppy wins at Championship shows, even making breed history by being the first Greenland Dog to win a UK Champ Show Puppy Group placing under judge Roy Baker at Birmingham National in 2019! 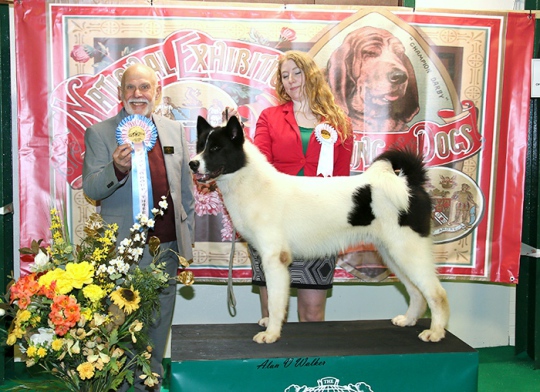 His 2019 continued well, starting his Junior Champ & Championship titles in Belgium, Ireland & the Netherlands, as well as racking up the class wins at both Open & Championship Shows in the UK, although sadly our FCI plans were soon put on hold by a combination of Brexit & Covid-19 restricting travel. 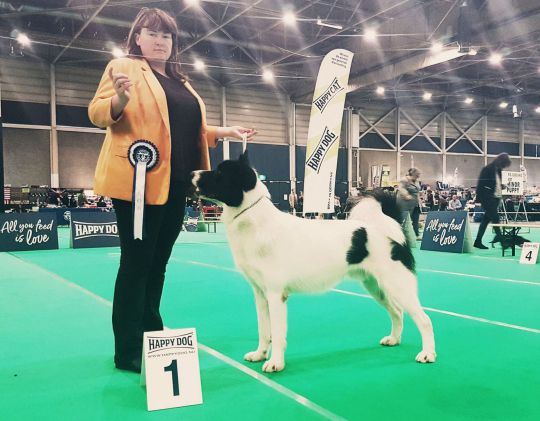 2020 proved a strange year, with the coronavirus pandemic cutting short many show plans, but nonetheless yielded some amazing results for Noah, not least his winning Best Dog & Best of Breed at Crufts in March - his first such accolade at a Champ Show in the UK, and what a way to do it! 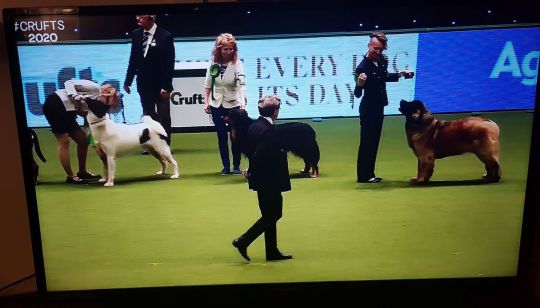 When UK shows finally recommenced in June 2021, despite a lack of coat for the first few months he still hit the ground running, racking up 2 Best of Breeds, 5 Best Dogs & 3 Reserve Best Dogs in the less than 4 months of Champ Shows we enjoyed, resulting in him being able to claim the accolade of Our Dogs Top Dog 2021 (as well as giving Suki & Balder Top Brood / Top Stud awards and along with Alice giving the Suna-Sanik Kennel Top Breeder in the UK). 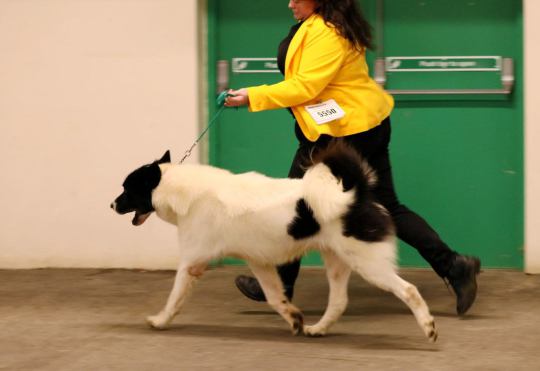 2022 has given Noah a cracking run at Championship Shows, unbeaten to Best Dog in breed classes with multiple Best of Breeds, including his second such award at Crufts, not to mention multiple Open Show Best of Breeds / Best AVNSCs and group placings! 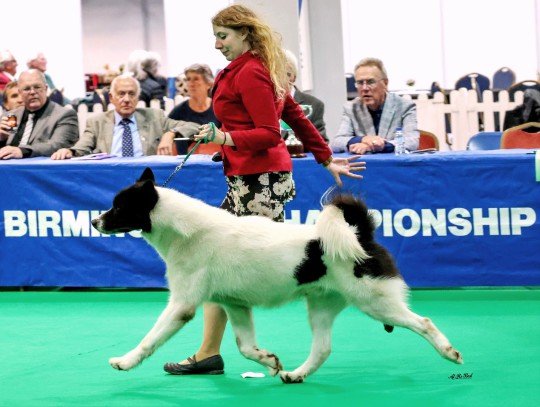 We also ventured back across the water to Paris for the European Dog Show & Championnat Du France in April, and he made us ever so proud with the CAC / CACIB & Best Opposite Sex on both days, earning him the European Winner & Latin Winner 2022 awards!

A couple of months later he ventured to Spain for the World Dog Show and once again earned the CAC / CACIB at all three shows, claiming the World Winner title and closing his Spanish Champion title! 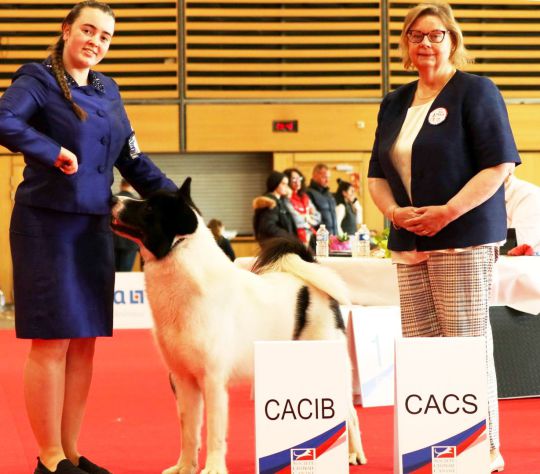 Weightpull it took him some time tp learn the ropes (not understanding why he should do something at all if not allowed to do so at 100 MPH) but showing much improvement by the end of a season in novice class.

He absolutely loves to run in harness and had his first competitive experience running at SHCGB Sherwood in January 2020, where friend Sarah took him out with her CED girl Peech and my Harry for an inaugural CED-Malamute-Greenland team - and they won their class! 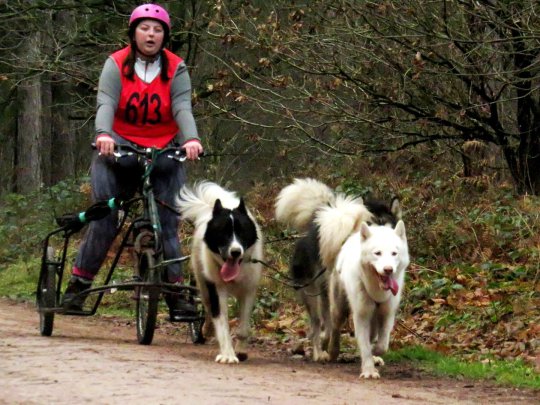 At 2 years of age, he started backpack training and so far is very much enjoying it - although doesn't seem to understand it doesn't require him to pull the whole way round ;-) 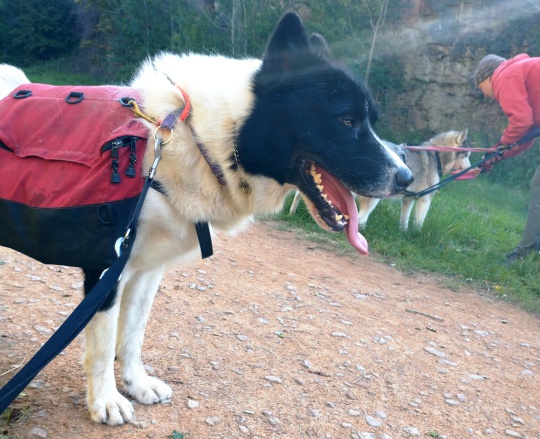 And finally, to prove there are some brains alongside the brawn, he has also enjoyed time representing the breed at Discover Dogs and  is one of only 7 Greenland Dogs in the UK (1 being his cousin Alice and another 2 her daughters) to gain a KC GCDS Puppy Foundation obedience award - clever boy :) 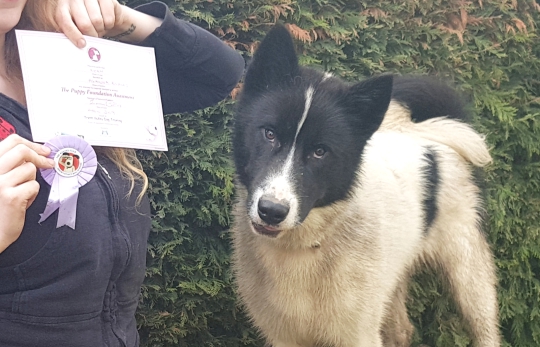 We are very excited to see what Noah can bring to our kennel as well as the breed in the UK & beyond, and remain looking forward to the future. 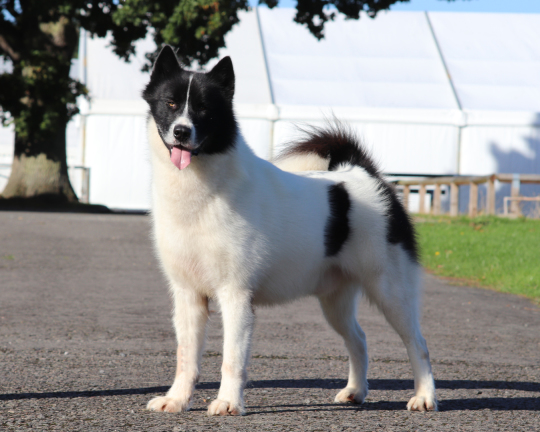