After a quiet month, we end of 2015 at the Allerton Weightpull - and it's not raining!
Harry is not on best behavious (more concentration needed)! but Lucie enjoys her time out despite continued muddy conditions, and has a final pull of 21.31x her bodyweight, missing out on the next weight by mere centimetres.

Today we say happy 12th birthday to our lovely Maya - still a grumpy old lady but one who I am very happy to have around as a golden oldie. 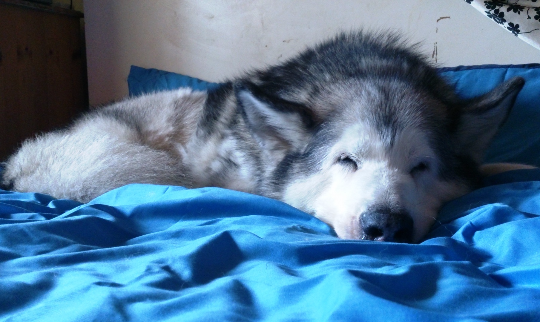 A good day at Grantham & District CS Open Show, where under Breed Specialist Judge Anna Ballington (Catua), Harry places 2nd Post Graduate Dog or Bitch, and Lucie wins 1st Open Dog or Bitch and Best of Breed. She then goes on to take Working Group 3 in a nice group of 8 under judge Stuart Lockwood-Brown (Shiloh).

A good start to the month at South Wales KA Championship Show, where under judge Steve Myring (Fortezza), Lucie takes VHC in a very strong Open Bitch class, and Harry places 2nd in Post Graduate Dog (behind the RCC winner no less). 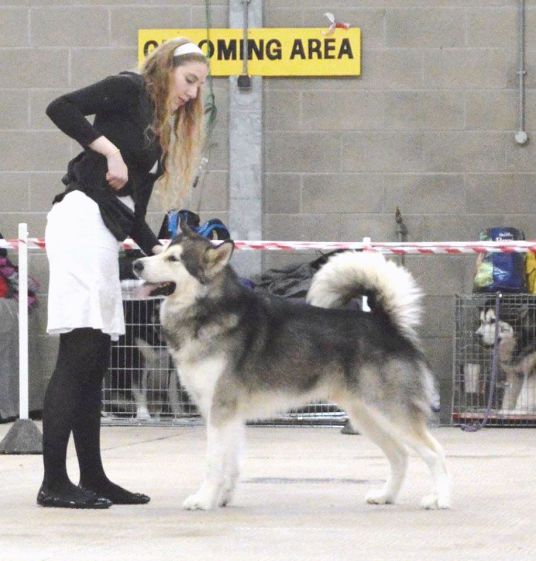 After a quiet Summer, we return to the show ring at the AMCUK Championship Show in the Rescue Stakes classes under Breed Specialist Carol Atherton (Casiat), where Harry places Reserve in Open Dog and Lucie 3rd in Open Bitch.

Both also have their annual eye screening for Herediatry Cataracts and am pleased to report both come back as clear for another year.

Happy birthday to Stan, who having joined the family at 8 weeks of age today turns 8 years old. 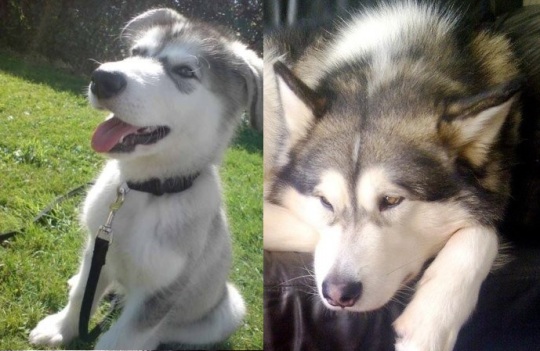 It was a blue rosette day for us at Northwich & District CS Open Show, with Harry & Lucie both taking 2nds in their respective Post Graduate Dog  & Open classes under judge Louisa Rogerson (Nosregor).

This weekend, Harry, Lucie & I head back up to Scotland again, this time heading a few hours further North to the Wilderness of the Cairngorms, where we meet up with friends to enjoy three days backpacking and camping. Over the course of the 3 days we cover circa 44 miles, with the dogs starting pack weights a minimum of 30% of their bodyweights. It is a very enjoyable trip, and big thank yous to Ian Elliot for organising and for all those who took part for being great company and for sharing the pictures in the gallery below.
I am also proud to say that the dogs efforts mean that Harry is now halfway to his AMCA WPDA title and has a starting leg towards his WPDX, and that Lucie has not only started her WPDX, but (*subject to confirmation) has closed her WPDA, giving her some extra letters to her name: RBISS Windberg Paparazzi To Fenrirkin WTD WPD WPDA* WWPD WWPDA WWPDX

A trip up to Scotland to attend SKC Championship Show today, where under Breed Specialist judge Barbara Stanier (Arctictrek) Harry places 2nd in Post Graduate Dog - the joint largest class of the day - which Crufts qualifies him for 2016. Lucie also comes away with 3rd in a nice Open Bitch class. 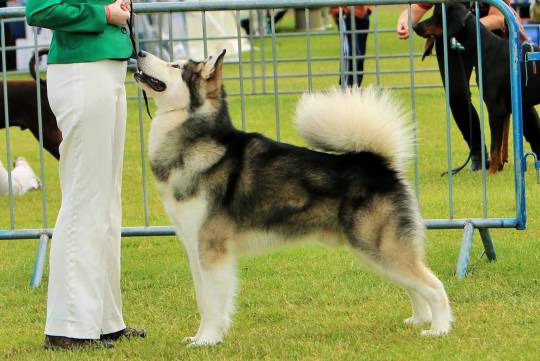 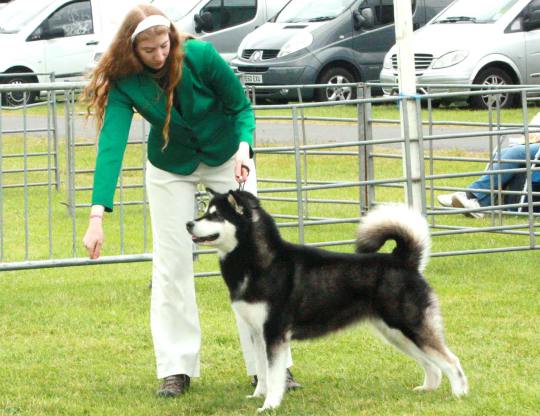 Lucie and I enjoy a girls day out at Birmingham Nationals Champ Show today where under judge Liz Bruns (Kirakoo) she takes Reserve in a lovely Open Bitch class.

Today is the Malamute Rescue Fun Day. I am there helping out, but I bring the dogs along for the day too and I am pleased to report that Lucie, having not had any formal obedience training for several years, passes her KC GCDS Bronze Award. Very pleased! 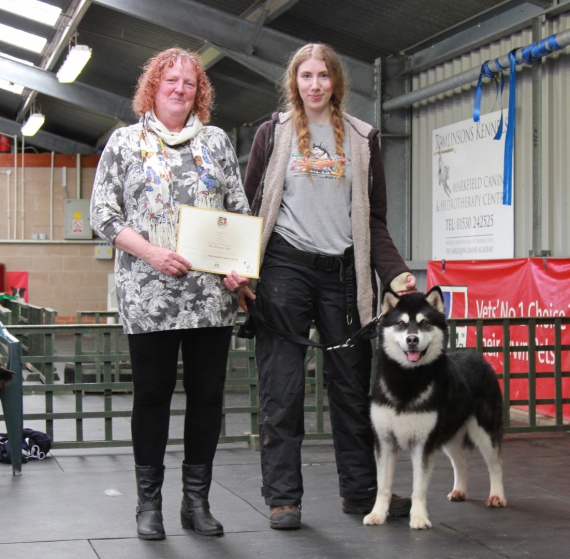 It's a cold and breezy day at the AMCUK Open Show, although thankfully the rain held off until the last few classes.

Harry also has an enjoyable day out, kindly handled by friend Charlie Bowden, where although unplaced in Breed Judging he comes away with 1st in Special Working Certified Dog under Avril Roper (Tokosha).

At the Alaskan Malamute Club of the UK AGM held today, the results from the 2014 Malamute of the Year Awards (the AMCUK's annual show competition for it's members) were announced. 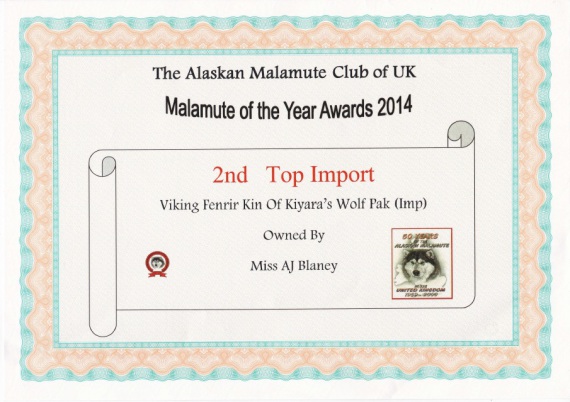 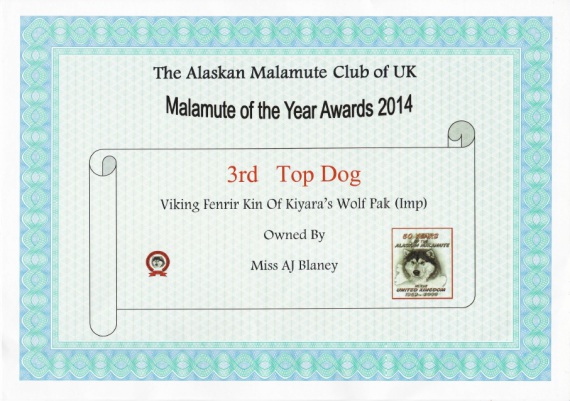 This was also the first year that the Working Malamute of the Year Award (again, an AMCUK annual competition for it's members) included a separate weightpull category from rally events, which takes the top 6 results from all eligible events for the 2014 / 2015 season.

Happy birthday to my special girl Lucie who is 5 years old; I am forever grateful that she came into my life, and she makes me proud every day! Thank you to Simon Cockram for this lovely photo of her taken 2 days ago: 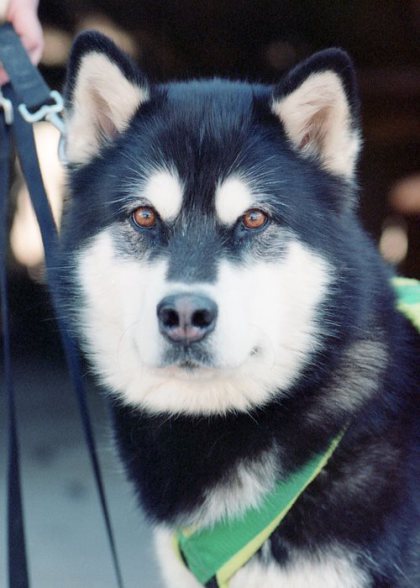 Back to Allerton Park, where this time Harry gets to go out exploring the estate for around 11 miles to earn himself a third WTD leg, running with friend Lula (Koromandel Firefight). Very proud of Lula's owner, Rebecca, too, who takes the team on my behalf, completing her first ever outing on the rig - what a great team effort! 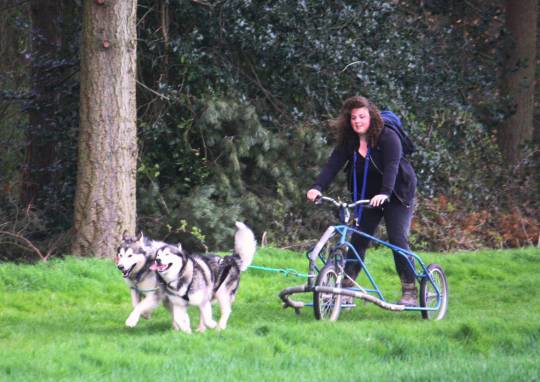 Today was the final competition of the weightpull season, and what a note to end on – we had a seriously large turn out with dogs still pulling after 6.30pm!
In the competition today, both Lucie & Harry were in a huge 61-80lb class and did me proud, both pulling 1800lb (a new personal best for Harry) to come 2nd and 5th overall respectively.
Icing on the cake for these results is that Lucie earned the award for highest percentage of body weight pulled on the day, pulling just over 29x her bodyweight, and with a pull of over 24x his bodyweight Harry also earned his 2nd WWPDX leg and 3rd WWPDA leg – clever puppies!
To finish things up, at the award ceremony Harry & I also got to collect the Cedarcreek trophy for 2nd place in the 61-80lb class in the overall Championship – the same trophy Lucie earned for the 2012 / 2013 season – a wonderful end to his first season competing!

The Easter weekend was marked by me and Lucie with a trip up to the Lake District where we backpacked and camped out with friends, with Lucie carrying over 30% of her bodyweight. Day 1 was tough with less than pleasant weather to endure as we did around 14 miles over challenging terrain, totalling circa 4,200 feet of ascension; day two, the weather had thankfully improved, and we cover around 11 miles and over 2,000 feet of ascent. I am pleased to say the fun and efforts of this trip mean Lucie has earned a second leg towards her WPDA title. Very proud!

The last round of the Allerton weightpull is a challenging one, with rain all day creating poor pulling conditions. Both dogs finish earlier than usual, with Lucie placing 5th in the 61-80lb class with a pull of 16.92x her bodyweight, and Harry placing 7th pulling 14.71x his bodyweight.

Myself, Harry & Lucie headed out yesterday for an 11 or so mile backpack and campout, climbing up to Salehow Beck in the Lake District, Cumbria in the company of friends. We were blessed with dry weather, fantastic views and the most beautiful clear night sky – however on the flipside dogs waterbowls were solid with ice by 10pm and think it got down to around -6 celsius overnight – fairly cold, even when sharing a tent with two Malamutes! And to round things off, as he was carrying 30% of his bodyweight, this trip also means that Harry has now, subject to AMCA approval, closed his WPD title – clever lad!

Back to the Allerton Estate today again, this time to enjoy an 11+ mile trek ; I run Lucie and Harry, which earns Harry a 2nd leg towards his WTD title. Very pleased with both dogs who work hard all the way round!

A really nice day at Allerton Weightpull, with a cracking turn out of over 50 dogs! Harry and Lucie both in the 61-80lb class; Harry pulls 1600lb (22.86x his body weight – so close to that 23x needed for his next WWPDA / WWPDX leg) to come 4th of 19; Lucie worked extra hard today, pulling 1700lb before I decided to withdraw her which was enough to not only place 3rd in the class, but also earned her the prize for highest percentage pulled at 26.15x her bodyweight.

Harry, Lucie & I head up to to the Lake District today where we enjoyed a nice quiet backpack around Whinlatter Forest with a walk up to Lords Seat / Barf to admire the views with friends. The rain managed to hold off for a majority of the walk (still plenty of mud though) and pleased to say, as we covered over ten miles and were carrying in excess of 30% of bodyweight, Harry earned another AMCA WPD leg in the process - good boy Harry. Thanks to Ian for organising, and extra thanks to Mandy for walking Lucie for me:

Today we are exhibiting at Crufts. Harry has qualified but stays at home, however Lucie enjoys a day out, going unplaced in a Limit Bitch class of 20+ entries but putting on a good performance and enjoying saying hi to the crowd.
I also handle the lovely Chena - Hawkam Kruzin On By To Kachemak WPD WTD WWPDX - who I am thrilled to see take 3rd out of 17 in Veteran Bitch - well done to the Kachemak crew on this great result!

Today we say a happy 2nd birthday to Harry and his littermates from the Kiyara's Wolf Pak V Litter - we hope his brothers and sisters have as fun a day as he has had here with us!

Today we head out for an eleven mile trek at Allerton. Harry works really hard, completing the first six miles with our Lucie for company, and then the final five with Rebecca Hartley's Lula (Koromandel Firefight), which I am pleased to say earns him his first leg towards his AMCA WTD title.

It's a wet and slippery weightpull at Allerton today, which sees all the competing dogs pulling lower weights than usual; Harry and Lucie come 4th & 5th out of 17 in the 61-80lb class, pulling over 16x and 19x their bodyweights respectively.

The first weightpull of 2015 is a challenging one, with ice / snow / sleet / rain and an ambient temperature that never exceeds one degree celsius making for difficult pulling conditions. I only have Harry in competition, and he works very hard, ultimately pulling 1300lb (17.57x his bodyweight) to come 4th in the 61-80lb class. Well done to all competing.

At Boston & DCS Championship Show Lucie places a respectable 2nd in a nice Open Bitch class, and Harry takes VHC in Graduate dog under our Breed Specialist judge for the day Nicola Singh (Sledog). Many thanks to Lee Baker for forwarding these photos of Lucie: