A wonderful day out at East of England Ladies KA Open Show.
Alice places 2nd in AVNSC Working to a nice Doberman under judge Eileen Kelly.
Jess goes one better, placing 1st in AVNSC Working Puppy & Best Puppy under the same judge, and going on to take Working Puppy Group 3 under Frances Richards!
And finally, Harry not to be outdone places 1st Open Alaskan Malamute & BOB under judge Betsy Ashcroft, and then not only takes Working Group 3 under Frances Richards but goes on to win Best AV Working Veteran!!
We decided after an already long day it was too warm to say for Best Veteran In Show, but very proud of our team's results all the same!

Today we attended East of England Championship Show, which was extra exciting not only as the first show in 16 months with Greenland Dog breed classes but also featured three of my Dylan x Alice babies competing together for the first time (and the girls did not disappoint)! Final breed results under judge Hazel Fitzgibbon (Smilesam):
Jess - 1st Junior Bitch, Best Bitch, Best of Breed, Best Puppy and…. a puppy group shortlist under judge Glen Dymock!!
Noah - 1st Open Dog, Best Dog & Best Opposite Sex
Alice – 1st Open Bitch
Zippy - 1st Puppy Bitch & Reserve Best Bitch (owned and handled Kimberly)
Elska – 2nd Puppy Bitch, 1st Special Beginner Bitch & Best Special Beginner (owned and handled by Charlotte)
Obviously super proud of all the team, especially all the pups who behaved so well even after such a long day.
And with only 2 male Greenland Dogs achieving a UK Championship Show Puppy Group Shortlist previously (the second of whom was her half-uncle-Noah who became the first Greenland to gain a puppy group placing) to the best of my knowledge this makes Jess the first female in the breed to make such a cut - over the moon!
Also competing was Harry, who although in his underwear still managed to take a VHC in Alaskan Malamute Veteran Dog under judge Fran Kaye.

Today we did something a little different by attending the Canadian Eskimo Dog Club of GB Open Show.
In the mostmain I was assisting with handling CEDs for friends, but as the club kindly schedule AV Sled Dog classes I snuck in a couple of entries for judge Tim Ball (Kaitak) who officiated the Stakes Classes.
Harry made me proud with a nice 2nd in the AV Working Sled Dog class (where he was the lone Malamute in an otherwise mixed Siberian Husky / CED entry) but highlight of my day was taking Alice and her two daughters - Jess & Zippy - into the AV Sled Dog progeny class where they won top spot against some lovely CED teams - a very proud breeder moment!

As normality continues to return, we have the excitement of our first UK General Championship Show since Crufts 2020, courtesy of Southern Counties.

Also at her first Champ Show was Elska (Fenrirkin Out of the Black), handled by owner Charlotte who did a fantastic job, not only taking 2nd to her sister in the AVNSC judging (Crufts qualifying at her first opportunity to do so) but went on to compete in the AV Rare Breed Terrier / Working / Pastoral competition where she not only won a nice Puppy Bitch class but went on to take Best AV Rare Breed Puppy – so proud of them both!! 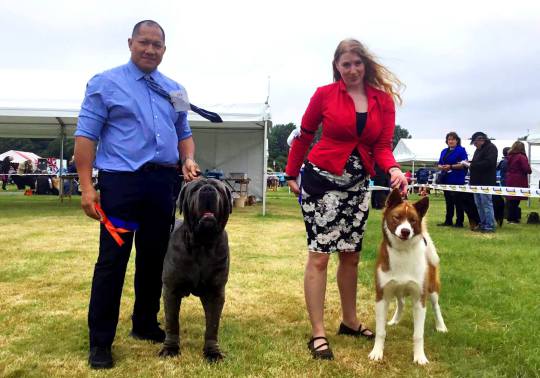 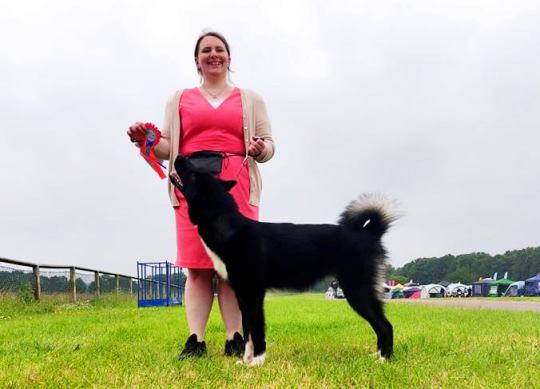 Another milestone for our little kennel with Elska (Fenrirkin Out of The Black) and owner Charlotte having their first show experience together at Scunthorpe CS Limit Show. They came 2nd in their AV Working Puppy class to a lovely Bullmastiff - well done ladies!! 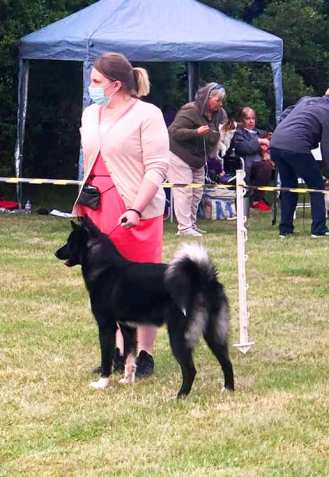 Another Open Show for us, this time a bit more local at Royal Cheshire CS.

Later in the day, the Greenlands were in AVNSC Working under judge Patsy Hollings (Gunalt). Alice came a pleasing 2nd to the eventual BAVNSC winning Russian Black Terrier, handled wonderfully by friend Julie-Anne Wright, whilst myself & Noah came away with Res.
Star of the day, though, once again was Jess, who not only went on to claim her 2nd BAVNSC Puppy in 3 days but also took RBAVNSC over her Mum - good girl, Jess!

Another line in the sand as we head South to support Southampton & DCA as one of the first all breed open shows to go ahead in over a year, made even more special as it is also the first show for my homebred Alice x Dylan baby, Jess.

No breed classes, so it was AVNSC Working where our judge Krystyan Greenland (Rajarani) had a cracking entry of 18 dogs across 6 different breeds, with only a couple of absentees on the day.
Jess not only did me proud by clearly enjoying her time in the ring (what more could you ask for from a 6 month old puppy at their first show) but went on to win both her classes and claim not only Best Puppy & Best Special Yearling but also winning overall Best AVNSC Working over some lovely dogs (including her Mum & Uncle)!

As if that wasn’t enough, she then went on to take 3rd in the Working Group and ultimately won 1st in the Working Puppy Group, making her (to the best of my knowledge) the first Greenland Dog to ever win a Puppy Group in the UK!!

Noah & Alice were also showing in AVNSC, placing 2nd & VHC respectively in their Open Class (with thanks to Roxanne Simms for her handling assistance).

Harry also came out for the day, placing 1st in his Open Class & Reserve Best Of Breed under Racheal Bailey (Akna), and also taking a pleasing 3rd in AV Veteran Working under judge Terry Purse (Tidemill).

Not a bad return to the ring! 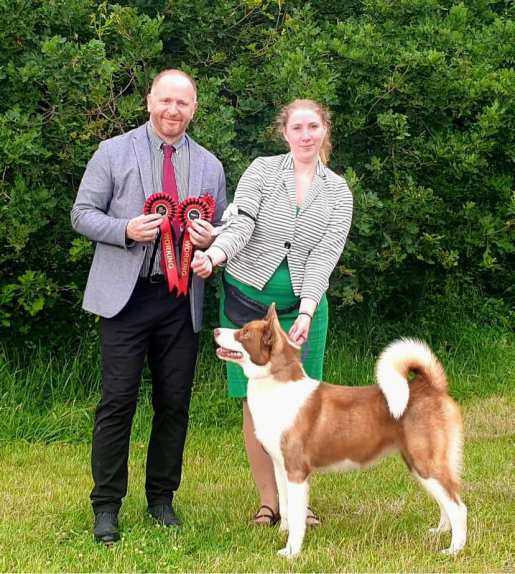 Today was the Alaskan Malamute Club of the UK Breed Speciality Open Show, a very exciting event as for us as it meant for the first time in over a year we actually attended a show!!
Looking through the catalogue, Lucie may have been one of the oldest competitors at 11 years old but was my star of the day, not only taking a respectable 2nd in her Special Veteran Bitch class under judge Lauren Pefitt (Samjoe) but also going on to gain another 2nd in the Working Certified Bitch class under judge Angela Anderson (Cherubini) - against a bitch 9 years her junior no less - and then ending the day by winning the Champion Stakes under Kath Howarth (Hawkam) against two younger males - so proud!!
Harry may have been super naked but still enjoyed his time in the ring, coming away with a 2nd in Special Open Import and VHC in his own Veteran Dog class.
Unsurprisingly most of the Greenlands stayed at home, however we did bring Jess along for some socialising and it was safe to say she very much enoyed herself too, making some new canine and human friends along the way.

It wouldn't normally be news, but with the Dylan x Alice pups turning 5 months old this week - and UK Covid restrictions finally relaxing enough to allow such things - two had their first rincraft experiences. Very proud of my own Jess and even moreso of Elska and owner Charlotte. Lots more practice to be had but most importantly both pups had lots of fun! 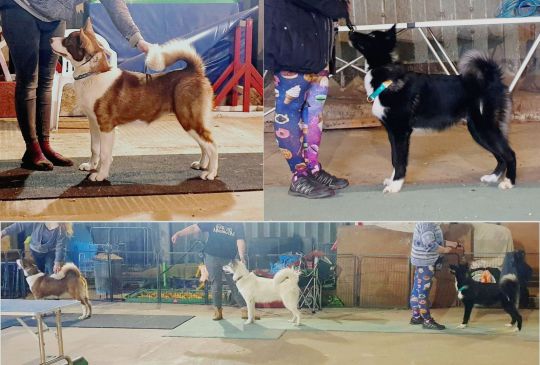 A big happy birthday to our very special Lucie - 11 years old today!! She celebrated with a nice forest walk with our puppy Jess, giving us some special photos of our youngest and odlest together.

It might not be the most exciting news, but after over 12 months of Covid restrictions and no events we were thrilled our local Dog Training Club was finally open again giving Jess her first every puppy training class. She had lots of fun meeting other puppies of different breeds and showing off the typical Greenland combination of intelligent stubbornness! 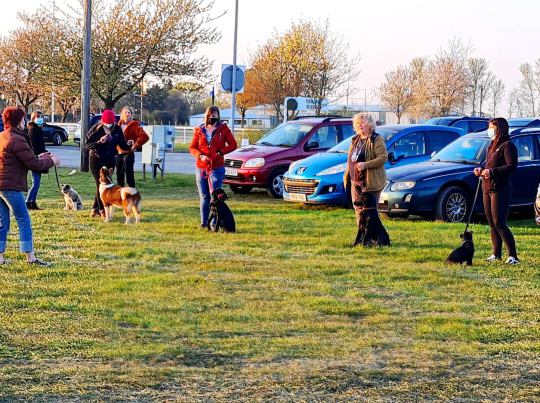 With Covid restrictions finally lifting, we may still have no events to share but we did manage to catch up with friends for some puppy socialising and general canine playtime. In lieu of more exciting news, we hope you can enjoy the photos.

Another bittersweet day, as in the space of 40 ish hours covering circa 1600 miles - and with a lot of paperwork and caffeine in tow- two more of our Dylan x Alice puppies are now in their new home!!
Good luck to Nours (Fenrirkin Not Afraid To Fly, was Malbec) and Tam-Tam (Fenrirkin Double Espresso, was Grenache) in their new home. It was tough saying goodbye after 15 weeks of having them with us, but I cannot wait to hear of their adventures in the French Alps and see them grow up with their new family. 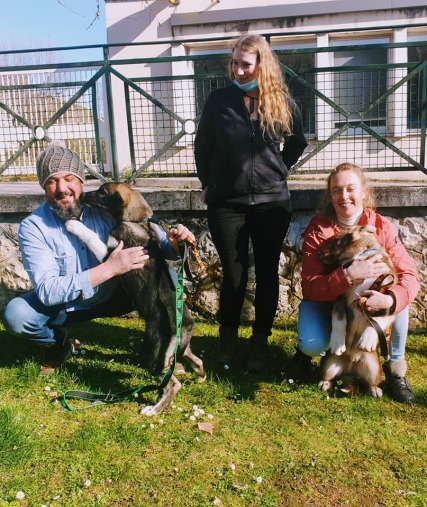 Another online show to keep us out of trouble, and this one was a special one as it was all in aid of raising fund for a Malamute in the care of registered charity Saints Sled Dog Rescue (SSDR) who had recently undergone surgery.

It's fair to say it was a success, with in excess of 1000 entries across the board and raising just under £2000 toward's her aftercare - in my own breeds there were a respectable of 17 Greenlands and 38 Malamutes for judge Ian Pullin (Whitewalker).

Both Lucie & Harry were in the Malamute Veteran class, coming away with 3rd & 4th (with the class winner going on to take Best Veteran In Show)!
Meanwhile, in Greenlands, Noah was 1st Open Dog & Reserve Best of Breed with Dylan 3rd in the same class, Alice was 2nd Open Bitch, Jess was 1st Puppy & Best Puppy in Breed with her littermates Nours placing 2nd, Elska 4th and Tam-Tam 5th - not a bad effort!

And I was also super pleased with Lucie coming 1st of 60+ happy dogs in the Best Smile novelty class under judge Monique Thorn.

Today we wish a happy 8th birthday to our special, German boy Harry. Chief puppy sitter, fantastic wheel dog and all round sweet guy who we are so lucky to have in our lives. 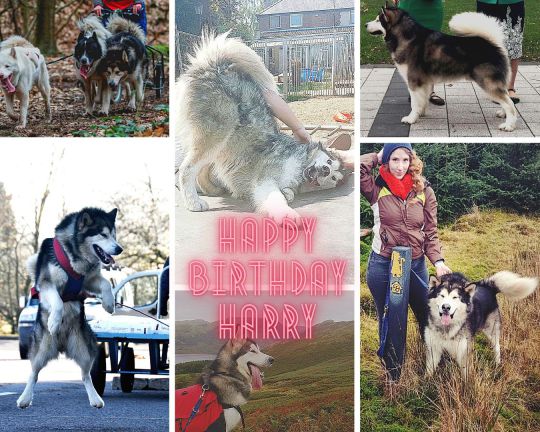 As our only canine competitions remain online, we decided to support the breed classes scheduled for both Greenlands & Malamutes in the Yakutian Laika Club UK Virtual Sled Dog Show - and what a great set of results!

In Greenlands, under judge Tara Fisher (Sannah) we came away with the following:

And as if all that wasn't enough, in the final BIS competitions, under Spitz specialist Christina Chapman (Bukris) Jessica went on to win Best Puppy In Show!! So very proud, and we even got some lovely rosettes to go with them! 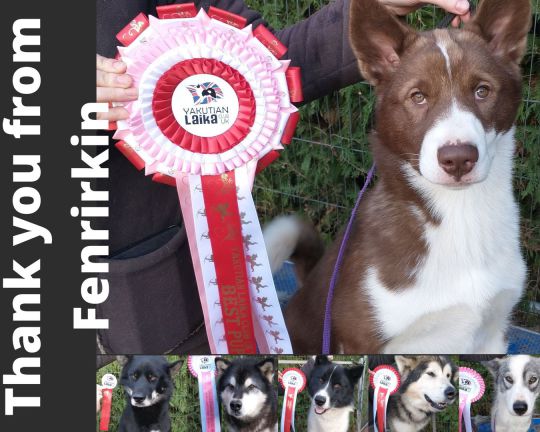 A bittersweet start to the month as three of our six Dylan x Alice babies have now left for their new homes in the UK. We wish them and their owners all the luck in the world for the future and cannot wait to see them grow up with their new families. 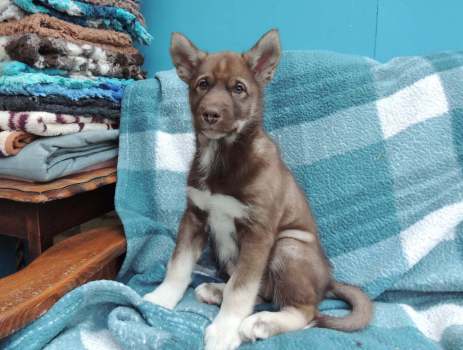 Elska (was Pinot) - Fenrirkin Out Of The Black 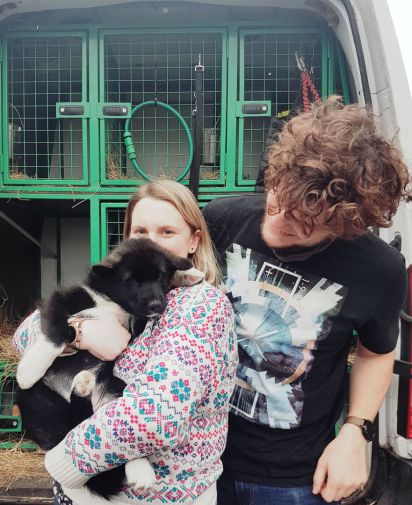 Nika (was Rioja) - Fenrirkin Catch Me If You Can 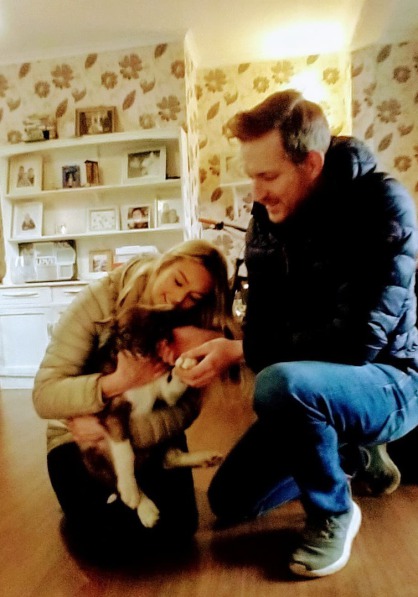 Today our Greenland pups turn a month old - what a wonderful way to start the new year even if COvid restrictions continue to limit the events we would usually attend :) 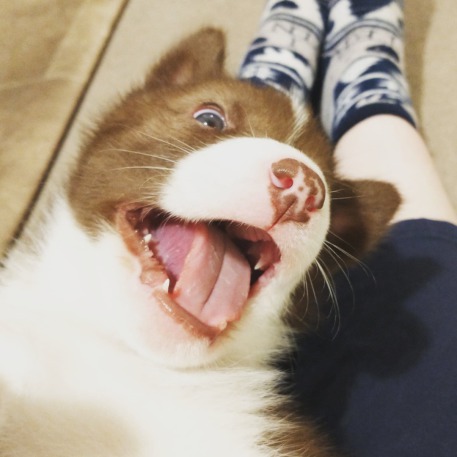 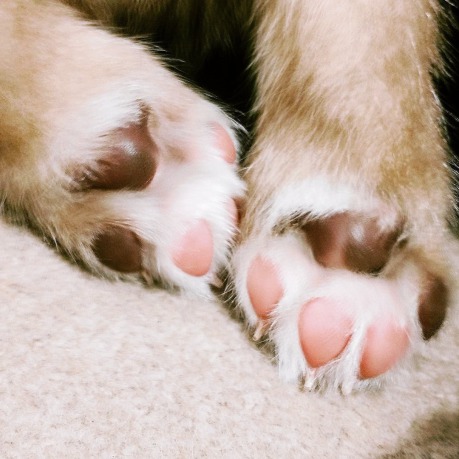